In order to solve cybercrimes, Roidl had to become a U.S. Marshal as these types of crimes can span many states and countries. In this role, he conducted forensic analysis of electronic devices, including computers and cell phones.

“I had to be able to cross state lines to get the bad guys,” Roidl explained. “The internet has no borders.”

When using the internet, Roidl encouraged students to consider whether information they come across is fact or opinion and who’s on the other side of the computer, as there are many cases of artificial intelligence and people hiding their identity.

“A characteristic of the internet is that you can be temporarily anonymous,” he said.

Roidl advised students to never respond to a cyberbully, but instead to save the evidence and report it to an adult or the police if it becomes threatening. Students should be mindful of what they post on social media, as billions of people could possibly see it worldwide and that might bring negative consequences.

“If you wouldn't say it in person, why say it online,” Roidl said. “If something feels wrong, say something.”

Privacy is vital, as most new computers and phones have a camera and online advertisers target social media users anytime they react to a post. Additionally, Amazon’s Alexa device stores information every time a user asks it to complete a task. 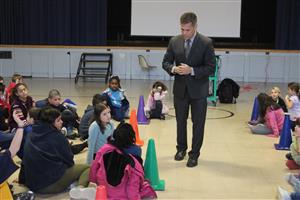 Thomas Roidl takes a question from an Alden Place student during his presentation on internet safety.

“You’re using Google, at home or in the classroom, it stores information, even if nothing is intentionally transmitted,” Roidl said. “Once we give away one permission, it often brings with it others.”

At Alden, the students took in the talk and asked Roidl thoughtful questions about the topic at hand and his life as a police investigator.

Fifth grader Evie Gonzalez found the talk helpful so she can determine what is good and bad on the internet.

“It helped me understand a lot more,” Gonzalez said.

Fifth grader Evelyn Licis was both shocked and amazed to learn about how many electronics have listening tools installed in them. She feels the talk will help her navigate the internet better.